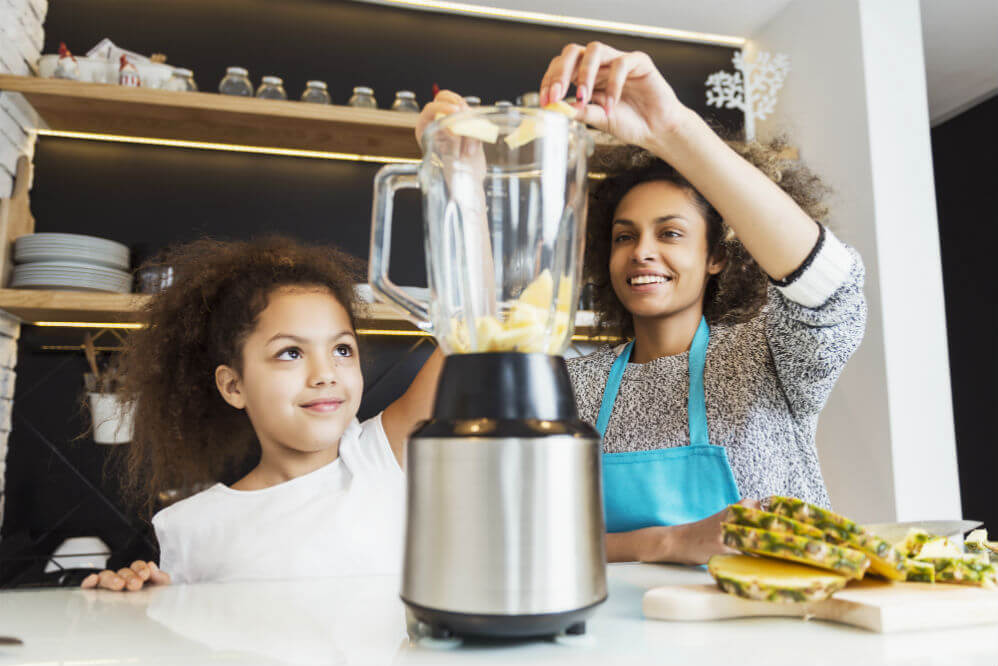 A versatile kitchen appliance, blenders can be used to chop up soft vegetables easily; give soups and sauces more consistency; and, more importantly, blend fruits, milk and other ingredients to a delicious afternoon or summer treat. Blenders have even made it out of the kitchen and have found their niche in scientific laboratories and the hippest bars in the city. But once the lights dim and the kitchen takes a bow, have you ever wondered, “Is blender safe to use for my purpose?”

Blenders were invented sometime in the early 1900s, and it has seen its share of development and success. They were first made for factory use and later found its way into every kitchen that can afford one. This kitchen appliance is powered by electricity to run a motor that spins blades at high speed, effectively chopping or liquefying whatever is in the “blending zone” at each pulse.

Parts of a Blender

Knowing what you will be operating is probably the first thing that you should do before worrying about how to be safe while doing so. The operation of a blender is simple enough but what’s inside is what’s important. Here are the more common parts of most blenders, all of which are pretty much self-explanatory.

How Do Blenders Work?

Once the food is placed in the jar, and the lid is affixed, a single flick of a button on the control panel would turn on the electric motor. This motor spins the blades so it can cut the food into smaller pieces until it is liquefied—or until you get the consistency you prefer. This is the basics of how blenders work.

In reality, however, it goes a little bit more beyond that.

Once the ignition is turned on, the motor would begin to turn the blades, and the continuous turning motion would result in a vortex, a tornado-like form of liquid. This vortex, in turn, would create a vacuum in its center that would suck the solids towards it while it ejects the liquids outwards from the bottom section.

This vortex continues until everything has been chopped or liquefied, and it would not stop into continuing the blending process until you push the stop button. In essence, the motor makes the blades turn, but it is the physics behind the vortex and the blades that spin and minces everything down.

Much like any appliance that needs to be plugged in, blenders should be handled with care and precision as a single miss might cause an untoward incident that can cause damage to property and even to losses in life, in extreme cases. Here are some safety tips and reminders that will help you answer the question, “Is blender safe to use?”

Always take the time to read the product manual of an electric appliance. It not only provides you with the instructions on how to use the product, but it also gives you some fair amount of warning and safety tips on how to use that particular product. Some would even have troubleshooting measures and whatnot, which are always helpful in the long run.

Do not turn on a blender if there is nothing inside the jar. Not only is this counterproductive, but you also risk overheating the motors but letting it run without the cooling effects of ice and other fluids that you would use for blending.

You can use knives to chop things up and spoons to scoop ingredients down but never put them in the blender jar and forget them. This will not only damage the blades but leaving a utensil inside a jar would scratch and might even crack it.

Certainly, this is a must for every blender. You may have watched it in movies and comedy skits and might think its funny to replicate but no, don’t even think about it. This not only wastes time and money, but you are also creating a mess, and the dripping fluids might get into the electric motor as well.

Most blenders can be used to blend certain items like soup and sauces to make them consistent, but make sure that your blender can handle their temperature. Industrial blenders are more suited for this task, but if you have to, read the manual and use a kitchen thermometer to check if your food item is below the heat limit. If not, then try diluting it with water or cold broth.

Some kitchens use blenders to mince meats and vegetables. Thaw these items out first before subjecting them to the vortex. Constantly using blenders to “chop” frozen items would damage the blades.

·    Throw Something Else In The Mix

Talking about frozen items, ice is probably the most common thing that you put in a blender, and it is frozen solid. It does melt easily, and it can be chopped into smaller pieces as needed. A smart way to go about using ice is to substitute frozen fruits instead. This not only packs in the flavor but gives you a more malleable frozen item for your smoothies and shakes.

Never fill a blender jar up to its lid. Most blender jars would require you to fill it two-thirds of the way as the vortex effect would require space to be more effective. Some experts would start with some items first and then gradually add more until they achieve the consistency that they want.

Always clean your blender after every use. Most jars and lids are dishwasher-safe, but always follow whatever is in the instruction manual. Blades are often cleaned using rags and can be brought to a technician for sharpening, while the motor is left as is and should never be washed, of course. Tuck any cords in to prevent tripping and unplug them when not in use.

Is Blender Safe to Use?

Technically, blenders are safe to use, especially if you are using the right kind and following the instruction manual to perform the action that you need. Recipes would sometimes require you to do an action which is a variation of what the manual would say but use your best judgment and take note of the safety measures in keeping everybody safe while using electric appliances.